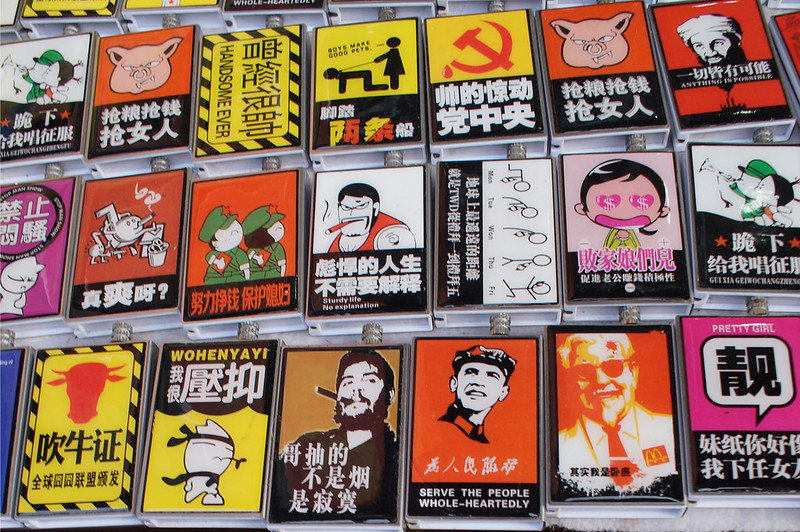 Photo: Tunxi Novelty Lighters by spezz licensed under CC BY 2.0

In the course of the last couple of decades, several Korean television shows have been gaining popularity, attracting Asian as well as Western audiences. Chinese broadcasting companies started importing Korean television program formats, such as “Keep Running”. To what extent do localised versions support the Chinese Communist Party’s regime?

It is no secret that the Chinese Communist Party (CCP) disseminates their agenda through state media outlets such as China Central Television (CCTV) and Xinhua News Agency. Due to their obvious efforts to support propaganda, their content might seem dull and is therefore not that popular among the Chinese audiences. At the same time, Satellite provincial TV stations focus on entertainment rather than disseminating the Party’s values, showing groups of famous people coming together, playing games and making the audience laugh, as can be observed in one of their popular shows “Keep Running”. However, while these shows are seemingly based on entertainment, with the increase of ratings as their sole purpose, there might be more to the underlying messages of such shows than meets the eye.

Since 1978, the legitimacy of the CCP has become increasingly dependent on the economic performance of the state. However, since the economic development has slowed down during recent years, the Party under President Xi Jinping’s leadership needed to adapt its ideology to combat the nation´s decreasing support of the Party. That is one of the reasons why they needed to reinvent their ideology by introducing new terms into their official narrative. And what better way to spread a message than through the media?

CCP as a natural successor of the Chinese civilization? “Positive vibes only”!

At the celebration of the 95th anniversary of the founding of the CCP in 2016, Xi added a new term to what was previously known as “Three Matters of Confidence”. Now called “Four Matters of Confidence”, it also includes “cultural self-confidence” or “cultural confidence”. The term is believed to represent the foundation of the country and its inner soul. According to the CCP, the term is an important factor for the prosperity and development of the socialist country, as well as China’s economy and society.

As a part of “cultural confidence”, the increasingly emphasized term “excellent traditional culture” is the CCP’s attempt to align itself with societal expectations without undermining its own ideology. While the lack of cultural self-confidence has been recognized as a problem in China, the CCP started putting a lot of effort into not simply promoting the increasingly popular traditional culture, but rather strategically emphasising certain aspects of it. The goal is to promote its own legitimacy and authority to establish the connection between Chinese traditional culture and the Party’s ideology.

Xi also introduced the term “positive energy”, which is supposed to put emphasis on the unconditional happiness of the people. The CCP targets people’s everyday life and their emotions to connect this positive energy to the regime. While this new agenda has already been adopted by the media, seeing your favourite celebrities engage in campaigns promoting positive energy might cause you to internalise this joy and positive vibes and unconsciously draw a connection to the CCP. One look at the official Weibo page of the show “Keep Running” reveals their intention. A recent post about the end of season 9 directly stated that the show will continue to create light, release happiness, and deliver more positive energy in the future.

One of the imported shows from South Korea is a spin-off of the variety show “Running man”. The show revolves around seven permanent members and occasional guest appearances who participate in a range of physical and intellectual games mostly for a symbolic prize or to avoid punishment. All permanent members and guests are celebrities of some sort, including actors and actresses, singers, and comedians.

When it was first aired in 2014, the show was known as “Running Man China”, but the name was later modified into “Keep Running, Brother”, which indeed puts more emphasis on the brotherly relations of the members. The notion of family as one of the central aspects of Confucian philosophy is expressed in the show through the members’ constant referral to each other as brothers and sisters. To make it even more obvious, we can see the members calling out the slogan “we are family” multiple times during various episodes, mostly when they carry out missions as a group.

Back to the roots

The CCP’s agenda to promote the cultural self-confidence of the Chinese nation can be seen through the efforts to present beautiful landmarks and cities such as Hangzhou, Xi’an, Luoyang and Wuhan, China’s rich history and traditions, as well as the success and achievements of the Chinese nation in the past and present. For example, one episode opens with the narrator describing Luoyang as the “most ancient city of China”, “cradle of Chinese civilization”, “capital for thousand years” as well as “city of the peony flower”. Furthermore, the whole episode was based on the legend of Wu Zetian and how her greed for having blossoming flowers in the winter resulted in Luoyang becoming the “city of peony”.

In another episode in Dali, Yunnan, Deng Chao, one of the senior members of the show at the time, hosted a fake traditional banquet. While the costumes and the grand ceremony did not seem to be historically accurate, the whole episode reminds one of ancient China and its tribute system, where envoys from other kingdoms would present their tributes as a gesture of subjection to the Chinese throne.

Another example of promoting Chinese traditions on an international level is the episode based on the Dragon Boat Festival (Duanwu Festival), which featured 15 international teams like Harvard University and Fudan University competing against each other. Throughout the seemingly scripted intro for the episode, one could not help but notice the efforts put into spreading the Chinese traditional culture and to confirm China’s great international status and achievements.

China as an excellent international player

The aspect of “cultural self-confidence” is presented more obviously since the beginning of the 2018 season of the show. While the “Keep Running” team visited the Czech Republic to promote the “Belt and Road Initiative”, another filming location was the headquarter of the United Nations in Vienna, Austria. The focus was put on China’s great contribution to the UN throughout the years. Their visit to Vienna was followed by a trip to Innsbruck, where they also promoted the upcoming Olympic Games 2022 in Beijing with the slogan “Winter Dream”, which strongly connects to the “China Dream” concept, a main contribution of President Xi to the CCP ideology.

As part of the Party’s agenda to combine national spirit with patriotism, the programme included a two-part episode in Yan’an, Shanxi, at the CCP Command Center during the 1930s and 40s. Here, the final mission was to perform a patriotic wartime piece by Xian Xinghai. The lyrics of “Defend the Yellow River” describe the Japanese invasion of 1937 and the defence of the Yellow River and Northern China.

While the pre-missions were already somehow playing on the sentimental side, it did not exceed the grand performance in the end at the Dingqing Island located at the Yellow River, which brought out a rather emotional response in the members. Li Chen, one of the permanent members of the show at that time, was crying already at the beginning of the song out of gratitude and pride to be part of the grand performance. The CCP’s narration of the Japanese invasion describes the CCP as the leading force that united the Chinese nation to fight back the Japanese, framing the whole performance as an ode to the Party.

While the individual episodes seem rather light and fun, a continuous observation of the seven permanent members, who admire the excellent traditional culture and also act as a moral vanguard, might indeed reveal the underlying ideology of the CCP. As shows like “Keep Running, Brother” reach a large audience, disseminating their ideology through such programmes could be considered a rather successful way to legitimise the Chinese Communist Party.