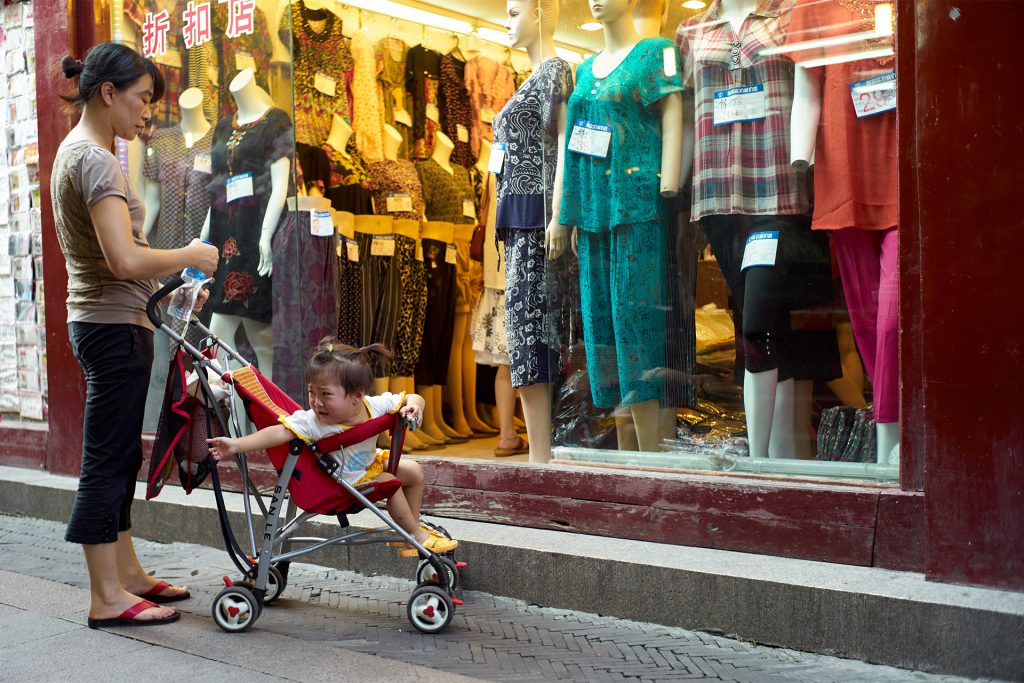 On May 31st, 2021, China announced the end of its two-child policy, now setting the limit at three children in an attempt to increase birth rates. Although this shift brings a relaxation of family planning policies, the Chinese government is still deeply involved in the reproductive freedom of women in China.

In 1979, China enforced a one-child policy to control population growth, preventing it from exceeding the country’s economic capacity.The one-child policy has led to a rapidly aging population and poses severe challenges to the livelihood of a mostly inactive older population, which is becoming a burden on the state and taxpayers. According to the recent Seventh National Population Census of the People’s Republic of China, the working population declined by 40 million in the past 10 years, meaning there are now fewer young taxpayers to sustain the older generation and prop up China’s economy. In addition, the one-child policy had a disproportionately negative effect on women, both mothers and newborn girls. Especially in rural areas, where boys are needed for manual labour, women often aborted female fetuses or abandoned newborn girls. This policy also led to a large number of adoptions in the West, and in some cases even infanticide. Changes were implemented later, and women were allowed to have another child if their firstborn was a girl. In order to prevent infanticide and abortions, China banned gender testing before birth.

The one-child policy was replaced by the two-child policy in 2016, but there was no significant increase in birthrates. In fact, the recent 2021 census shows that the average birthrate in China is at its lowest in decades. The number of births has decreased by 18% compared to last year, and the annual population growth is the slowest since 1953, at only 0.53%. Soon after the census, China declared the end of the two-child policy, setting a new limit at three children. This has sparked a debate on compensation to families who wanted more children in the past but were forbidden from doing so. Women pregnant with a third or second child were heavily fined, some even forced into using birth control or having an abortion.

The legal status of surrogacy in China

In all of this, a broader story is unfolding – the story of women’s physical autonomy. The concept of reproductive freedom protects women’s freedom of choice and bodily integrity. This includes the right to abortion, contraception and, ultimately, the right to conceive and to bear a child. It is concerning to see that the reproductive freedom of women is still seen as an issue of domestic politics around the world and not an inalienable human right. Surrogacy has been discussed as a way for women to exercise the right to self-determination over their own body and to help infertile women conceive a child. On the downside, due to exploitation and alienation of women’s bodies, this is still a globally controversial topic.

In China, surrogacy is currently illegal. There is a loophole, however: women are allowed to travel abroad to act as surrogates. This has resulted in commercial surrogacy, where agencies “export” Chinese women abroad, taking care of their visas, medical requirements, egg and sperm donors. Surrogate mothers are paid, and part of the fee goes to the agency. However, the lack of regulation of surrogacy in China has led to problems such as the exploitation of women for sex and fake surrogates stealing the couples’ money after aborting the fetus. Some Chinese couples also use surrogacy agencies to illegally determine the sex of their unborn baby.

A recent international scandal involving Zheng Shuang, an A-list Chinese actress, added to the already heated debate. Zheng Shuang and her partner had decided to use a surrogate but questioned the decision later. Zheng Shuang first wanted the surrogate mother to abort the babies and later abandoned her partner and the children in the U.S. When audio recordings of the matter surfaced, it triggered a torrent of criticism toward Zheng Shuang and ignited a heated debate among Chinese netizens. Two months later, the National People’s Congress (NPC), China’s top legislative body, tackled surrogacy.

An outright ban on all forms of surrogacy had already been discussed in 2015, but was dropped in favour of regulating the grey surrogacy market. At the 2021 session, Jiang Shengnan, one of the NPC delegates, picked up the proposal again. She advocated criminalising any agencies that carry out surrogacy-related activities and pushed for a crackdown on surrogacy in general. In contrast, Zhu Lieyu, a delegate who supported the three-child policy, argued that a ban on surrogacy would ignore the needs of families unable to conceive. In light of decreasing birth rates, Zhu proposed legalising gestational surrogacy for medical reasons, which would allow a fertile woman to carry the embryo for an infertile couple. The proposal also included creating a new institution tasked with guaranteeing legal protection for all parties involved. These first steps would be a necessary precondition for creating a safe environment and preventing potential exploitation of women and human trafficking for surrogacy purposes. As such, the law would target the grey market and hopefully regulate surrogacy, granting surrogate mothers much-needed legal and medical protection.

What should be the way forward?

Since neither of the proposals have been decided upon yet, surrogacy is still an open question in China. While surrogacy can indeed lead to human trafficking and the exploitation of women, a ban cannot address these issues sufficiently. Clarifying the legal obligations of all parties will help minimise the risks involved. Surrogacy should be regulated by laws ensuring comprehensive legal, medical, and social protection for everyone involved. Surrogate mothers need to be offered medical support, while parents need to be ensured that their child is delivered under safe conditions and released into their care after birth. In addition, steps need to be taken to prevent human trafficking, sexual exploitation of women and the abandonment of children after birth. Whether this will be the next step in China’s gradual relaxation of family planning policies remains to be seen. Until then, women’s bodies and physical autonomy will remain subject to politics.