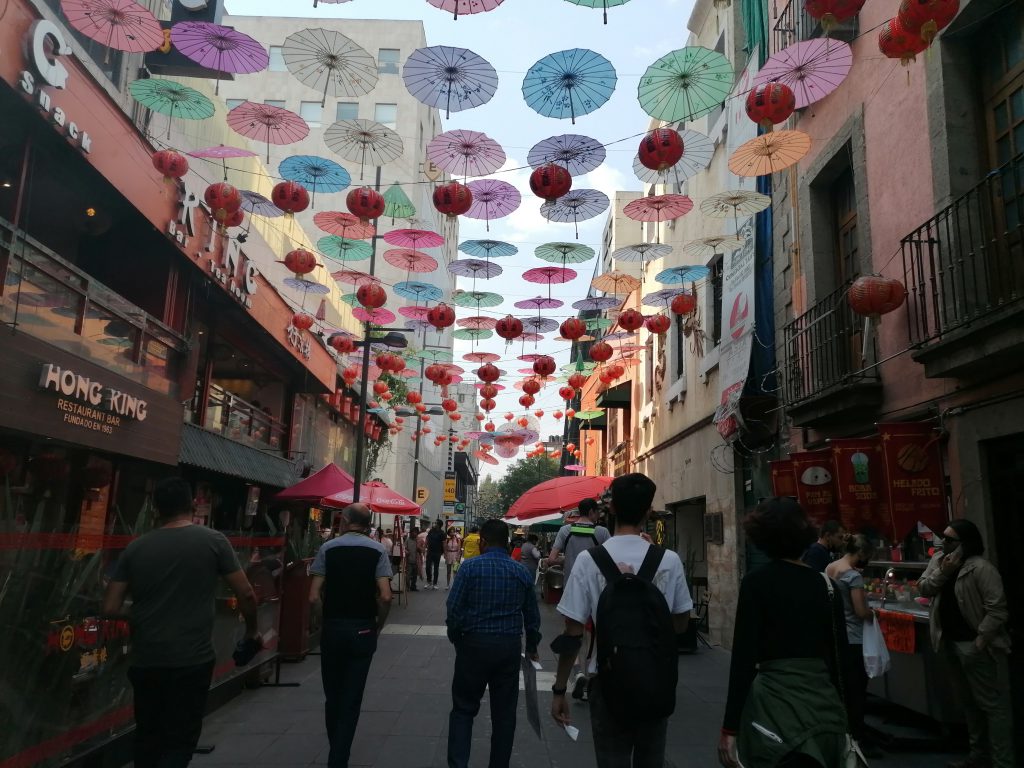 Chinatown is often associated with lanterns, authentic Chinese food, an “exotic” atmosphere, and, most importantly, the community of Chinese people. However, what if the community is missing? Paulína Ovečková takes us on a walk through the Chinatowns of Mexico City.

Chinatowns are areas of a city outside of China where many Chinese people live and there are a lot of Chinese restaurants and shops or a conglomeration of predominantly Chinese businesses and culture. In addition, they usually attract crowds of tourists with a particular visual image of Chinese-style decorations and restaurants – but it does not always have to be this way.

New Chinatowns do not usually aim at attracting tourists and are mostly located in the suburbs. Although not frequently mentioned, Mexico City is an example of a city with both a “traditional” Chinatown and new clusters of the Chinese population with vital economic activity outside of the city centre that can be considered „new“ Chinatowns.

According to different studies, the number of people of Chinese descent in Mexico varies from 6 to 50 thousand. Most of the immigrants came from Guangdong, and a large part of them reside in Mexico City. The first significant influx of Chinese people began in the 19th century because of the high demand for imported cheap labour in the US. The situation changed with the restrictive policies of the US government towards Chinese immigrants. Many Chinese were forced to move behind the southern border.

At the time, Mexico tried to attract more immigrants with its policies, but with the Mexican Revolution in the early 20th century, a substantial period of “Yellow Peril” arose. The anti-Chinese sentiment escalated with a massacre in 1911 and continued with the expulsion of many Chinese and their Mexican families in 1931.

After this outflow in Mexico, major turbulences in China, such as the civil war and World War II, forced people to leave the country. Some of them headed to Mexico City, where the decimated Chinese community was allegedly supportive of illegal migrants at the time. This wave of migrants brought about the era of cafés de chinos, Chinese-run diners that served mostly cheap nutritive Mexican food with a few Chinese food options in working-class neighbourhoods. Some cafés survived until now, engraving the powerful image of “pan chino”, a type of steamed and fried buns made of yeast dough, into the memory of the locals.

The traditional Chinatown of Mexico City is next to the historic city centre. Locals say it is the smallest “Barrio Chino” in the world since it only covers one block. Although its history goes back to the early 20th century, renovations in the last two decades shaped its present form.

Entering through a large, impressive gate, I notice it is cramped with people, but not Chinese people. Mexicans and tourists are strolling around with colourful sweet dumplings in their hands, joyfully looking around at the Chinese lanterns and other decorations, enjoying a free afternoon. This one street, Calle Dolores, has become a tourist attraction with photogenic Chinese decorations, an “exotic” atmosphere, and food. However, it is almost impossible to find Chinese people here.

There are less than ten Chinese restaurants, all of which employ Mexican staff. In interviews, some of them say the owners or chefs were Chinese, but it is not clear if their answer is honest or just supposed to make me believe the food I am eating is authentic.

Shops of Barrio Chino sell products associated with Chinese culture and traditions, such as chopsticks, carillons, decorations with Chinese characters, traditional Chinese dresses in qipao-style, incense stick holders, and food. After a few visits to Barrio Chino, I finally encounter Chinese and Taiwanese shopkeepers in three of these shops.

Unfortunately, most refuse to give a statement and tell me to speak to their Mexican employees. The communicative ones confirm there are almost no Chinese in Chinatown anymore; some of them own restaurants or shops, but if I am looking for a “real” Chinatown, the neighbourhood Viaducto de Piedad is the destination.

Recently the number of Chinese migrants in Mexico has risen. In 2013, for example, around 12,000 Chinese arrived. With the recent change in China’s position in the world economy and globalisation, the mode of Chinese migration has also changed. In today’s Mexico City, besides the traditional Chinatown as well as encountering restaurants offering Chinese food scattered around the city, one can find other, more recently established spaces with a significant concentration of Chinese people. There are currently two spaces that can be labelled as “new” Chinatowns.

First coming to Viaducto Piedad, there seemed nothing special about the neighbourhood, just regular raffish buildings without outstanding decorations and an “exotic” atmosphere. Nevertheless, more Chinese people are on the streets compared to other neighbourhoods. Signs written in Chinese characters are visible on some houses, and restaurants and supermarkets are offering Chinese goods.

Some of the restaurants‘ menus are in Chinese, suggesting their clientele is Chinese. There are also people of Chinese origin among the employees and clients of the restaurants. I only spoke to a few since some only spoke Cantonese and others were hostile to outsiders.

How the Chinese came to live in Viaducto Piedad remains a mystery to outsiders. However, according to some research, it is because of the excellent transport connections to the centre, affordability, and now the already present Chinese community. The Chinese presence dates to around 30 years ago. Their community remains closed, providing goods and services mainly to the internal group.

Furthermore, for the mentioned framework of new Chinatowns, it is interesting to point out that Viaducto Piedad is neither suburban nor downtown but still quite close to the centre considering the size of Mexico City. All of this makes Viaducto Piedad very different from traditional Chinatowns.

Plaza Izazaga and its surroundings around the subway station Isabela Católica are examples of how China’s export-oriented growth strategy influenced the emergence of new types of spaces with a Chinese presence in Mexico City and their economic activity. This shopping street is full of Chinese stores selling affordable wholesale electronics, clothes, cosmetics, decorations, and everything one might or might not need.

Plaza Izazaga 38 is a multiple-floor wholesale store. Entering the building, one cannot overlook the long queue of customers waiting for the elevators, a paper-made dragon on the ceiling, and many diverse products. The same pattern is observable in many stores: a bored-looking Chinese person sitting by the cash register looking at their phone and Mexican employees talking to each other or customers.

Many Chinese shopkeepers said they emigrated because of intense competition and lack of job possibilities in their homeland and because Mexico has low entry requirements. Some of them had a relative in Mexico. Most of them have recently arrived and do not have many friends, so they appreciated a chat in Chinese.

The sellers I spoke to mainly were not integrated into the Chinese community. Some of them feel lonely and miss their homeland; they have difficulty learning Spanish and finding their place in Mexican society. They are also tired of long working hours and the resulting lack of time and energy to socialize.

It is yet to be seen how this new wave of immigrants will shape their space in Mexico City, but for now, the popularity amongst locals makes Plaza Izazaga bloom.