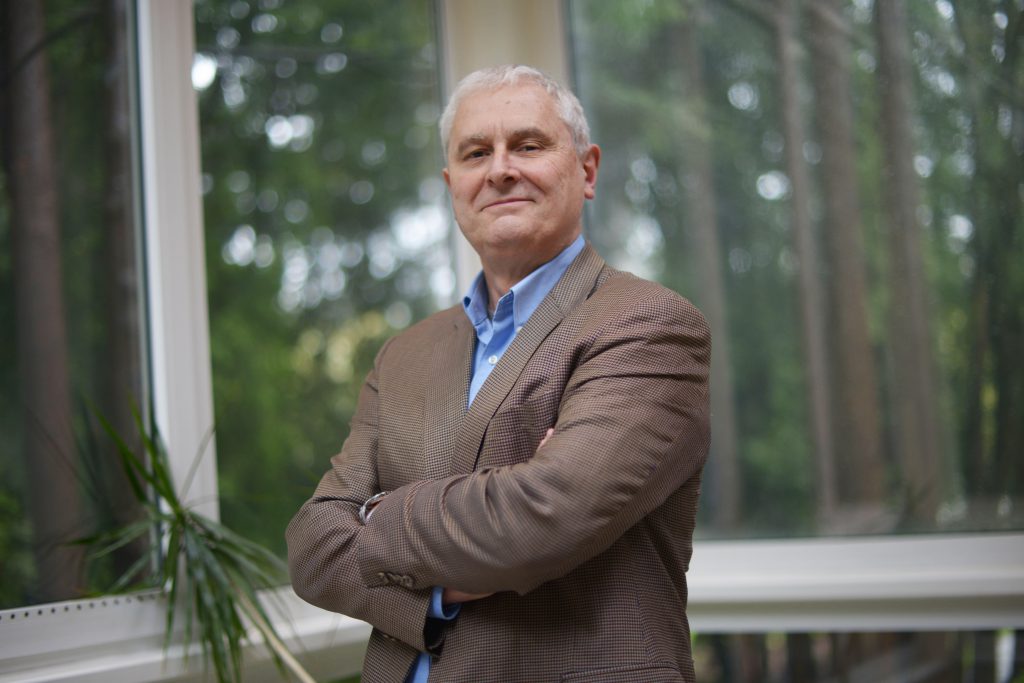 by Sabine Hinrichs and David Lenz

Many have compared the current Chinese president Xi Jinping to Mao Zedong, founder of the People’s Republic of China. But how similar are these Chinese leaders really? We talked to Timothy Cheek, professor at the University of British Columbia.

Timothy Cheek is a renowned historian focusing on the Chinese Communist Party and intellectual debate in China. He is Director of the Institute of Asian Research and Louis Cha Chair Professor of Chinese Research at the School of Public Policy and Global Affairs and the Department of History at the University of British Columbia.

dasReispapier: We often read about comparisons between the Chinese president Xi Jinping and Mao Zedong in the press. Do you see any parallels between the two?

Timothy Cheek: It’s understandable that people would reach back to Mao because Xi has garnered to himself so much power and has claimed many more leadership positions than his recent predecessors. So, when folks outside China see the party focusing on one leader and using those terms like “core” (核心), they go: ‘Oh-oh, when did we last see that?’ Mao is not only a comparator but he’s a metaphor for a disapproval. Actually, Deng Xiaoping [Chinese leader in the 1980s and 1990s, editor’s note] had a lot of the same power and – except for the Tian’anmen crackdown on June 4 1989 – pursued policies that we in the West generally approved of, like reform and opening. My point is that it’s inaccurate to compare Xi with Mao, if you’re thinking in terms of how the party operates and Xi’s apparent inclinations. From his statements and activities, Xi is not like Mao, he is like Liu Shaoqi [President of the PRC 1959-1968, afterwards purged and expelled from the Party, posthumously rehabilitated in 1980].

„If Mao had died earlier, China would not have been liberal and moderate.“

Xi is much more in line with the sort of ideology that we associate with Liu than with that of Mao. I’ll give you a simple example. For Mao, when he wanted to shake up the party, he sent in the “irregulars”. He asked intellectuals to do it, then the peasants and later university students because he didn’t trust the party.

What was Liu’s approach to the problem? Send in the work teams. And what is the Discipline Inspection Commission that Xi relies on so much? A series of work teams. With Xi, there is a return to harsh, intolerant orthodoxy that we’ve seen in the past and that we also associate with the Mao period but was fully endorsed by Liu. I think that what we see with Xi is a very assertive and intolerant ideology that excludes all alternatives and requires an “outward manifestation” (表现). And that’s pretty much how China would probably have been in the 1960s without Mao.

In other words, if Mao had died earlier, everything would not have been liberal and moderate and happy. You would have this kind of institutional ideology. My approach is that throughout the 20th century China has been led by regimes that use ideological governance.

What does “ideological governance” mean?

It means a kind of governance that looks like what Xi is doing. It has to have an ideology that is ambitious, transcendental, specific and demanding, a bit like early modern Catholicism. And the other way I distinguish Mao, Liu, and Xi, is that Mao’s purges were like the Salem witch trials– crowds of people running around and grabbing some poor souls, throwing them in a lake and lighting a bonfire. But Liu’s purges were not so chaotic but very well-ordered, just like the Spanish inquisition.

Whether mob violence or institutional terror – we all pay attention to the abuses, terror and the excesses. Ideological governance requires these means of control, but it is much more. It also includes the “positive propaganda” of science, civilisation, and order. Mao did not invent this, neither did Xi. The first ideological leader of modern China was Sun Yat-sen [first president of the Republic of China, elected in 1912].

„Insubordinate society is my only hope for China.“

So, would you call this “ideological governance” a modern phenomenon? And how does the population react to it?

Regarding the 20th century, “one party, one ideology, one leader” came from Sun in 1924, and Chiang Kai-shek [leading political and military figure of the Republic of China] made the same claim. The ideological governance that Xi is pursuing has been consistently attempted by Chinese governments, I think, for a very long time, but in the history of modern China, it is directly traceable to Sun.

People in the West are asking: ‘Oh, are Chinese just more tolerant of dictatorship or do they not need so much personal freedom?’ No. People in China value their independence and personal freedom as much as people anywhere else in the world, but because of the social conditions in China – so many people in the major cities, so many people in such a small space – they accept that there have to be limitations. That does not mean, however, that people always do what they are told to do.

Even during the pre-modern era, the kind of claims made by Ming and Qing emperors were always totalitarian. For example, for most of those centuries, it was illegal for ordinary Chinese to leave the country and extremely difficult for foreigners to enter China. Yet, despite the restrictions on travel and mobility imposed by the totalitarian central government, millions of Chinese went out and populated Southeast Asia during the Ming dynasty and had hugely productive commercial ventures trading back to China. So, in the end, I’ve come to call this insubordinate society my only hope for China.

On top of the totalitarian or ideological claims of their governance, ordinary Chinese people, including local officials, have shown the most brilliant, the most inventive, and the most creative ways to get around absurd policies. Never have I seen people lie to their government with such a straight face. And I maintain my faith in that.

From our observation, as the ideological leader, Mao had the ability to act as a mediator inside the party and lead the fractions to a consensus. To which extent is Xi able to do this?

Mao’s role was unique. He had unprecedented revolutionary charisma. This charisma is like: ‘When confronted with what Mao told me to do, even though what Mao says sounds irrational and unreasonable to me, I’ll do it anyway’. He had a way to bring people together. By the early 1950s, Mao navigated tensions inside the Party without a huge disaster.

But from 1957 onwards, after he was humiliated during the Hundred Flowers [political campaign that encouraged intellectuals to criticise the CCP; 1956-57], I don’t see him doing much conciliating. And my explanation is that power corrupts, he had been the superstar for too long.

Would you assume that Xi totally lacks this kind of revolutionary charisma?

Absolutely. But Liu never had that much charisma, and he built up power within the party organisationally. A rational bureaucratic approach to ideological governance is still ideological governance, and so Xi gets to have the names; everyone just has to quote him. But Xi is copying Mao without having Mao’s charisma.

Are you interested in finding out more about the insubordinate society and intellectual voices in Chinese society? Read the 2nd part of our interview with Timothy Cheek.